JULIET VENTER ART
For the last six years I have been in the habit during Lent of starting a new icon of the Nativity, using the space for reflection which the church prescribes at the culmination of the Christian year to focus on the beginning of the incarnation story. The iconography of the Nativity of our Lord Jesus Christ developed early in Christian history, and is very deep indeed in its theology. Many contemporary Nativity icons are based on mid- to late-Byzantine prototypes, such as the mosaic in the monastery of Hosios Loukas (near Athens) which contain characters and details from the prophetic books and apocryphal gospels, as well as from the synoptic gospel accounts. These were not chosen at random to provide a little local colour, but from the wandering sheep to the fruiting bush, they contribute to the deeper resonance of the image. Even the inner design of the icon – circles, squares and the position of the Christchild have a special significance. Here is a link to a blogspot where you can read more about the image written by an Orthodox priest http://orthodoxword.wordpress.com/2010/12/28/testimonies-on-the-icon-of-nativity/

I am not a theologian, therefore this account is simply of my own artistic journey with the image.

2009    My first nativity consisted of the central detail only – the Mother of God on her imperial bolster, reverently holding her incarnated Lord. I have always been fascinated by the 'black holes' one sees in certain icon types, and by the image of the cave. Ostensibly this refers to the cave of the nativity in Bethlehem, acknowledged by tradition as the birthplace of Christ, but it also resonates with the pagan notion of the 'philosopher's cave', or cubiculum, the place to which the philospher retreats to 'incubate' or receive wisdom and new life. This fascination has obviously informed my painting, which seems very dark – though the background was not actually black but a very deep blue. 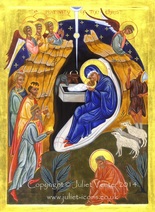 2011    The next year, the wise men finally arrived in my composition. This is really concatenating two festivals and two icons – more of this below. It seems to me that spring is breaking out in this icon, the colours have a freshness and lightness which I did not consciously set out to achieve. Often in Nativity icons the gaze of Mary is directed at Joseph in compassion and forgiveness, while he wrestles with his presumed doubts of the virgin birth – Joseph, of course, standing in for all doubting humanity. However, as before I represented Joseph rather dreaming, and so I tried to direct the gaze of the Theotokos out of the icon to engage the viewer: I imagine her saying 'Taste and see..' 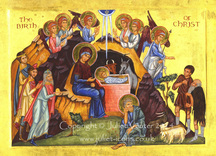 2012 - By this time I had begun my continuing interest in manuscript illumination, comparing art of eastern and western churches from 1000 to 1250 AD. Many details of this composition, including the landscape format and the choice of colours, were taken from an 11th century Byzantine manuscript. The presence of the 'kings' really concatenates two festivals and two icons, nativity and epiphany, two revelations of God to humanity. Here the Mother of God is seated, more as if on a throne, while the wise men pay homage and present gifts as if to an emperor. The swaddled figure of the Christchild, in a coffin-like manger of stone, is a visual reminder of Christ's body later laid in the tomb. It also resonates with the iconographic representation of the raising of Lazarus, and with the 'Anastasis' icon in which the risen Christ descends into hell and pulls Adam and Eve bodily from their tombs.